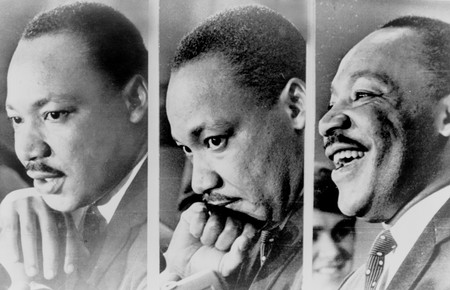 I didn’t read Letter From a Birmingham Jail until I was in college. That fact alone is an indictment of the primary education I received. As a youth in America I was taught to revere Dr. Martin Luther King, Jr. as a non-violent promoter of peace and justice, but never to engage myself beyond a sanitary recognition of his greatness. In an age where prominent Americans say shit like THIS, it is more important than ever to have a holistic understanding of history through primary sources. I was never expected to understand his struggle or his values. In the 49 years since his death, the legacy pushed upon him by the state has turned an icon into a brand.

King was a complex figure whose righteous rise and tragic fall was uniquely American. His path from pacifist organizer to revolutionary idealist is well documented. When the Washington Post Editorial Board proclaims his character as a True Conservative, wherein the sole evidence provided to support the thesis is a series of out-of-context quotes from one speech given in 1954, it belies his radical dedication to reform. It is an injustice to the study of history. Clear, partisan propaganda. The erasure of his radicalism, of the structural threat he posed to the corrupt and unjust institutions of this country, cleared the way for anyone to co-opt his likeness for their own purposes.

I am not an expert on Dr. Martin Luther King, Jr. I don’t pretend to be. I just implore us to wholeheartedly engage with the content he produced in his short time on earth honestly before assigning a role unto him. Too often his quotes, plastered against a black and white photograph, are used to justify specific conduct. In a gross display of irony, the very purveyors of the deep state who sent MLK a letter telling him to kill himself, wished a Happy MLK day. King used his life to pursue justice. His philosophy was developed through intense study and practice in addition to the real world horrors beset upon African-Americans in this country. He recognized the moral imperative to act for the betterment of the masses. So read his words. Absorb them. Apply them to your life. Don’t blindly use his universal veneration to further your politics. Recognize the disingenuousness when his legacy is co-opted for means that don’t reflect his values. The only way to do that is to educate. That takes time and effort. Politicians and the media will continue to assume that we are fools unless we educate ourselves about our history. They will continue to adopt figures for their own means and assume we are too lazy or robotic to question it. We are gifted with a plethora of primary source documents at our disposal and have the ability to research everything. I haven’t read all of his work, but what I have read has inspired me. It has inspired me to question the motives of our leaders. It has inspired me to visualize the capabilities of this country. It has inspired in me the urgency of the pursuit of justice and righteousness. It has inspired me to develop my own sense of morality, through introspection and learning. It has revealed to me the true definition of patriotism: visualizing what this country can be–not blindly following what it is.

What do you think? Cancel reply