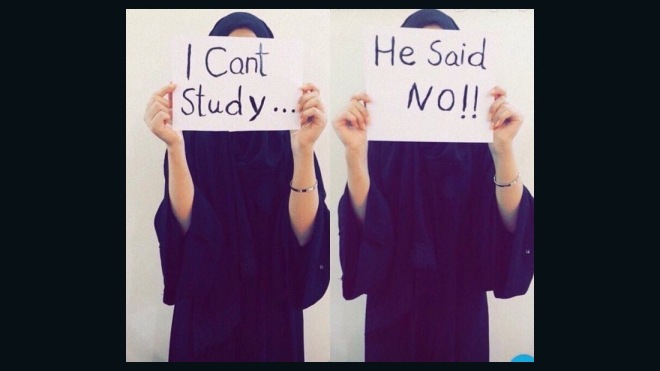 Posted on January 19, 2017 by Sarah Vandervennet Posted in Perspective

I stared over my shoulder as I passed through airport security on the west coast of the Arabian peninsula. As I tell this story, it’s hard for me to believe that this is considered the liberal side of this kingdom. I held my passport and I prayed. I prayed quietly out of desperation. I said goodbye to my parents; they wanted me to leave, I wanted to leave. I thought of how lucky I am to have such great parents, and how painful it is to be away from them. I cried as if someone had died; I think part of me had to die to be able to deal with the painful idea of knowing that I might never be able to return to my homeland. A police officer asked me for my passport and my permission to leave the country. My divorce wasn’t finalized. He was still in control of whether or not I could leave.

Under Saudi Arabian male guardianship laws, a woman requires consent from her husband to leave the country. Women are on such a tight leash that a forty-five year old woman would have to get permission from her young son to leave the country if he was her only male relative.

My thoughts drifted away from the airport. When I first met my ex-husband, the cruelty of others made him seem kind. I didn’t have anything else to compare him to. I told him about my dreams, my views on life and religion. Even though we disagreed, I thought he’d respect how different my views were. But there was a struggle that I saw on his face when he was around my family, or when he witnessed me debate others on political matters. Confusion about how my parents raised my siblings and me.

His family was different. His mother was very religious. She would leave the room if we played music. She thought of god as an angry, bitter man who demanded constant worship and didn’t want you to enjoy life. She wanted her son to be worshiped in that way too. She never tried to hide how she didn’t see me fit for her son. She said I should respect my husband by covering my face or wear the usual black robe.

This male control over women extends beyond the law. In Saudia Arabian society, men are expected to protect their female relatives’ honor, to whatever extent necessary. A diligent man will go as far as tapping the phone line to keep watch over his wife. He will hit his sister if she talks on the phone to a man. If he doesn’t, if he actually treats the women in his life with love and respect, he faces accusations of homosexuality, a crime worse than being an untamed woman.

But it’s not just the men who play a role in the subjugation of women in this country. When you’re a woman raised in a society bound to a strict moral code, with the men around you claiming they must protect you from other men, you internalize your powerlessness.

My aunt found her husband in bed with different women. Multiple times. When she found out I was getting a divorce, she told me all men are the same. But they’re not. My father treated my mother like a queen. He never raised his voice at her, he never let her go to sleep knowing that she was mad at him. I had seen that love; I knew it was out there somewhere in the world. I felt sorry for my aunt when she told me to stay with my husband. As much as I wanted to go off on her for saying that, I had to stop myself and think of what she had learned from her environment. She learned helplessness. You live it and you see it around you and it becomes a cultural norm. Even when you have the door wide open for you to escape, you don’t notice it.

That is, if you have an opportunity to escape. I’ve always been lucky in my parents’ open-mindedness and support, not to mention that they possessed the resources to send me to the U.S. But for most Arabian women, your husband is the person that drives wherever you need to go, he can control whether you can leave the country or even your college campus, if he lets you attend college to begin with.

When I asked for divorce I had been in Ohio, where we moved to attend Kent State University only a few months after we were married, for two years. I had been his hostage for two years. He didn’t let me go out or make friends. I would go to class, come home, sit alone in the apartment. For two years I kept an emergency bag packed with everything I needed to leave, and then I finally did.

It was New Years Eve. He came home and asked me for money. I refused to give him money to blow on whores and strip clubs with his friends. He told me if I didn’t give him any he would hit me. I didn’t believe him. As I turned around to lock myself in my bedroom, he gripped me by the arm and I asked him to take his hand off of me. He asked for money again and I said no. I remember my heart pounding out of my chest. I remember telling myself not to let him see that I was terrified. I saw it happen in his eyes, I felt it happen before it even did, I braced myself for impact. In a matter of seconds I was fighting my way out of his grip around my throat.

I had to put an escape plan together. The first step was to be recognized, get my face out in public, established in the community in some small way, even if it meant sitting at Starbucks at the same time every day. I had to make a friend. I needed someone I could trust, someone to call in case of an emergency, someone who would miss me if I suddenly was gone.

My plan worked. I finally made two friends, one at Starbucks and one at the campus international office where I worked, who I could confide in and trust to support me. Now it was time to make the call to my parents. They said I should come home and let them help me. I hesitated. I was scared that if I went back to Saudi Arabia my husband would be able to prevent me from ever returning to the U.S., but my father promised he’d make it happen. He bought me a ticket for two weeks later.

The day before my flight my husband found out I was leaving. I was terrified he would find a way to keep me from getting in the cab to the airport. I packed what I could, but I left most everything I owned. My car, my apartment, furniture. I remember screaming to his face, “Take it, take it all! I want my freedom!”

So there I was, handing over my passport, hoping that he hadn’t canceled my traveling permission online at the click of a button. When it went through I didn’t celebrate. I got on the airplane and sat down. I waited. I counted the minutes till take off.

Leaving your husband in Saudi Arabia is a completely different story. Some women have successfully walked away and established their own lives. This means having the resources or family support to have something as basic as a driver to get to the grocery store. Nowadays more women hold higher education than men, and there are more and more businesswomen, female engineers, filmmakers. But women are still treated as if they are incapable of taking care of themselves. Saudi Arabia now awards scholarships to both men and women, but women are not allowed to travel without a male guardian with them. Despite protests to the male guardian laws, and even promises from the government to abolish them, Arabian women remain oppressed at the hands of men. Even though women back home are the ones responsible for taking care of everything for their families, from finances to making food, washing dishes, doing laundry, waking up everyone in the morning, and on top of that looking gorgeous as fuck while doing it.

Sitting on the plane, I put my hands on my heart and felt it pound. I had to have something to look forward to. The thought of a stranger was more comforting than his familiar unsettling face. The brutal memories of him forcing himself on me still haunted me.

I’ve learned to be really good at being my own comfort. I tried to picture what kind of love I wanted. What it would be like to have someone to lay next to at night, talking about our passions. Cracking silly jokes only we would laugh at. I tried to picture myself waking up to someone I liked, someone who liked me back and was comfortable with me being as silly as I am. I pictured myself being myself, simply happy. I craved love I had never tasted but knew was out there for me.

The plane took off and I finally felt relieved. A vision of my life unfolded in front of my eyes. What I wanted to do became clearer. I promised myself to celebrate my life every chance I got. I knew I could heal, and it took me time, but I did it. I’m happy and I try to bring that to others’ lives as much as I can.

My story reflects that of my people and my country. This is me putting it all on the line, being as vulnerable as I can be. My writing isn’t always accepted. The backlash can be brutal. Friends and contemporaries in Saudi Arabia are facing jail time for saying the things I’m saying. I hope to show that not everyone in Saudi Arabia is closed-minded. And it is getting better in ways, and can only get better the more we challenge ideologies, the more we envision the kind of lives full of love and acceptance we know we deserve.

One thought on “Saudi Arabian Male Guardian Laws: How My Divorce Gave Me My Freedom ”